Wondering if an Arctic Spas hot tub is right for your needs?

Thanks to their innovation in the hot tub industry, Arctic Spas is one of the most well-respected hot tub brands today. They were one of the very first companies to design and manufacture an “all-weather” spa that could essentially be used anywhere on Earth.

Of course, the true question is,

Does this company manufacture the right spa for you?

Let’s find out in our Arctic Spas reviews!

Our top picks for arctic spas

Arctic Spas does not have any of their prices listed on their website, as the price that you pay depends on the area that you live in and the dealer that you purchase it through.

If you click the button below, you can find out more details on the Arctic Spas prices in your location.

With that said, Arctic Spas models have been known to sit in the mid-range realm of hot tubs in terms of pricing.

On the lower end, you should expect to spend as little as $4,000 on an Arctic Spas hot tub.

Rather than shopping around to find the best prices for these spas, fill out the free questionnaire below. Our unique service provides consumers with quotes on hot tubs based on their specific preferences. 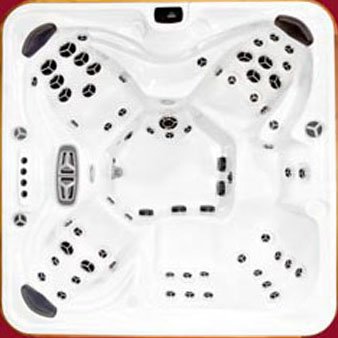 The Custom Series is the widest-ranging line under the Arctic Spas umbrella.

We like to think of the Summit XL as a stretched version of the Summit, which just so happens to be the most popular tub in the Arctic Spas lineup.

The Summit and Summit XL share a mixture of swivel and lounge seats with depth for people of all sizes.

The Tundra combines both capacity and comfort, providing room for up to seven people at once. Arctic Spas added four shuttle seats and three multi-level seats, all along a huge footwall, perfect for families!

Returning from a bit of an absence, the Kodiak is a smaller version of the Tundra, built with a high-quality lounger seat to prevent people from sliding or floating around.

If you’re a tall person, you might want to try out the Yukon model, which has seven-foot footwells, some of the largest in the industry! There are two corner bucket seats, as well as bench seating for comfort.

For those looking for a more portable option, the Cub is a solid choice. With His and Hers shuttles seats and a high-quality gravity chair, the Cub is small yet comfortable! Of course, for the ultimate compact hot tub experience, we highly recommend checking out the Arctic Fox model. With two lounge seats and a deep design, it is perfect for those who simply want a place to soak in intimacy. 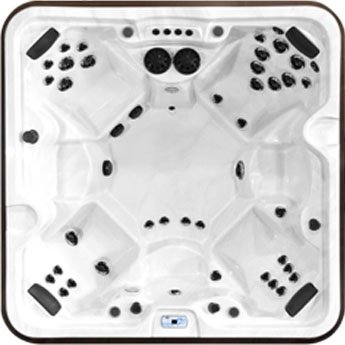 Arctic Spas has been engineering spas for well over 25 years now.

All of the spa models in the Classic Series are representative of the company’s history and the innovations they have made along the way.

The Mustang is the first in the Classic Series. It is a revamp of the older Mustang model, though has much smoother lines and more ergonomic seating.

You can enjoy the spacious lounger or sink deep into the therapy seat for an invigorating massage.

Best of all, it is big enough for the whole family with a six-person capacity!

The next spa is the McKinley, which is quite unique in that it provides users with individualized seating and open concept design.

With four corner captain’s seats and a whopping seven-person capacity surrounding a large footwell area, it is the perfect spa for large families or entertaining.

Beyond the McKinley, the Totem is another excellent choice for families with tons of space and comfortable features. The 7’ footwells are massive thanks to the circular design. Plus, you have the addition of a dedicated therapy seat and a multi-level bench area, which makes it a bit more versatile than the McKinley in terms of seating options.

Speaking of versatility, the Eagle has an incredibly diverse selection of seating, including a corner nook, a therapy seat, and a roomy lounger. Arctic Spas essentially crammed everything they use with their tubs into this beautiful specimen.

The last spa in the Classic Series is the Timberwolf, which has more than enough room for three people with a single upright seat and two loungers. If you’re looking for a spa with a smaller footprint, this Arctic spa is a solid choice.

Lastly, we have the Core Series. The Core Series has seven different tubs, all of which represent the “core values” of the Arctic Spas company.

In our eyes, these simple hot tubs are straightforward in design, perfect for the minimalists out there.

The first in the lineup is the Grizzly, which has room for six people altogether, including two captain’s seats, bench seating for three, and a lounge seat.

It provides a decent mixture of size and comfort for those seeking out a classic spa design. Similar to the Grizzly is the Husky, which has room for four people with an upright seating design and an open seating plan.

The hot tub is very simple and has a smaller footprint than the Grizzly.

The Orca spa makes full use of the open-seating plan with enough room for seven. In terms of the Core Series, the Orca is probably the best one in here for large families. The Aurora spa also makes an excellent family spa and it also comes with more features, including top skimming filtration and 20 high-quality therapeutic jets.

Moving down to the smaller end of things is the Ellesmere spa, which has room for three people, including two upright seats and a lounge seat. You can almost think of it as the complimentary version of the Timberwolf from the Classic Series. It’s perfect for condo owners or those with small decks thanks to its simple, short design.

Last but not least, we have the tiny Otter spa. The Otter is the best choice for couples, or for those who need a truly compact tub to fit in a small space. It has room for two people and is rectangular to help it fit into smaller spaces.

Beyond the top-notch construction design and versatile spa options, lies the Spa Boy software. This automated water care system takes the guess out of maintaining your Artic Spas tub.

The technology utilizes medical-grade sensors that analyze water cleanliness parameters that are key to a balanced spa.

The software ensures that the sanitizer levels are always kept within the optimum range, making sure that you know whether or not you need to add more at any period!

Spa Boy alerts Arctic Spas owners through the Spa Boy app if the pH value of the tub moves off balance.

In our eyes, this technology has truly changed the bathing experience. You never have to worry about whether your spa is running optimally. Plus, you'll always have the luxury of soaking in a silky, high-sodium and low-saline bath as long as you follow the Spa Boy suggestions.

Final Verdict - Should I Buy An Arctic Spas Hot Tub?

We hope that our Arctic Spa Reviews have helped to narrow down your buying decision. There are plenty of reasons why we would suggest going with an Arctic hot tub over other spas or swim spas.

For starters, Arctic Spas is renowned for its insulation packages and efficient heat recovery systems, which work to contain heat in the coldest of environments. Beyond the sheer build quality of these spa models, the insulation system will help to cut down on running costs and allow you to use your Arctic spa in just about any climate on Earth. They were even one of the first hot tub companies to provide smartphone control for hot tub monitoring!

Secondly, there is an Arctic spa model for just about anyone. From the large, eight-person tubs with tons of seating options and water jets for the whole family, to the compact, two-person tubs, perfect for more intimate settings, this company truly does it all.

Getting a spa for your home could be the best choice you've made for your personal health and wellness in years. When you're ready, make sure to fill out our questionnaire below to get multiple price quotes from local hot tub dealers based on your preferences! Our service is free and we offer the lowest quotes, saving you thousands.