When we think about revolutionary spa companies, Dynasty Spas is one of the first that comes to mind.

Of course, the main question is,

Does Dynasty have what you are looking for in a hot tub?

That’s exactly what we are here to explore today! Come with us as we go through a few Dynasty Spas reviews!

Our top picks for dynasty spas

Dynasty is a hot tub company that prides itself on consumer customization. This means that the cost of the hot tub you choose to buy will completely depend on how much you want to customize it.

There are hundreds of different customization combinations, which would make it nearly impossible for us to provide you with exact prices.

Overall, the Dynasty hot tub brand covers the entire range from budget hot tubs to luxury spas. If you want more info on Dynasty Spas pricing, make sure to hit the link below!

The first thing that is important to note is the fact that Dynasty Spas carries five unique hot tub lines! Let’s explore the features and benefits of each line. 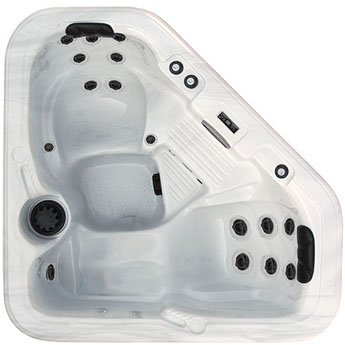 The Hideaway Series is the entry-level line, perfect for buyers on a budget.

These hot tubs are some of the smallest in the lineup as well, perfect for those who have limited real estate.

One thing that makes these hot tubs unique is the fact that they utilize 110v plug and play operation.

You don’t need to rewire anything in your backyard or set up special converters. Simply plug your hot tub in and get it working right away!

The Hideaway Series has incredibly small tubs, which range from two to three people in terms of capacity.

The two-seater tubs feature loungers for full-body hydrotherapy experiences while the three-seaters feature a combination of loungers and a bucket seat for those who want a more custom hot tub experience. 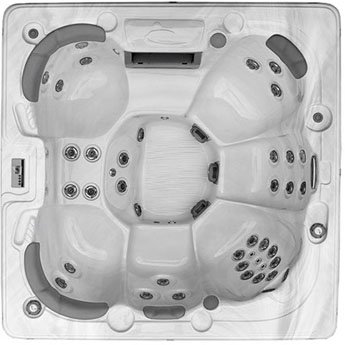 The Passport Series sits a step up from the Hideaway Series with larger, traditional options. There are four hot tubs to choose from in the Passport Series, including both seven-foot and eight-foot models.

Each of the tubs has lounger and bench seating options. All of the hot tubs in the Passport lineup are around the same size.

They are equipped with enough room for seven people in total and they each come with 42 stainless steel jets and 425-gallon capacities.

In terms of additional features, you can choose to add a circulation pump, inTouch remote spa operation, Bluetooth Audio, RMAX Insulation Panels, or Reflectix Insulation Foil Wrap, to any of these tubs.

For those who are looking for a more traditional hot tub, the Passport Series is the way to go. 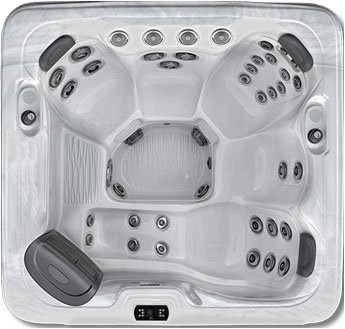 The Affinity Series is a hybrid of the Passport Series and the Hideaway Series.

The five hot tubs in this series are built with traditional lounger and bench seating designs, though they are a bit more compact for smaller families or spaces.

Three of the hot tubs in this lineup are equipped with loungers while the other two rely on bench seating along.

The capacities range from five to six, running in the middle of the line in terms of size.

Beyond the additional features that come with the Passport Series, you can also add LED illuminated jets, inClear Bromine Water Treatment, and a Blower! 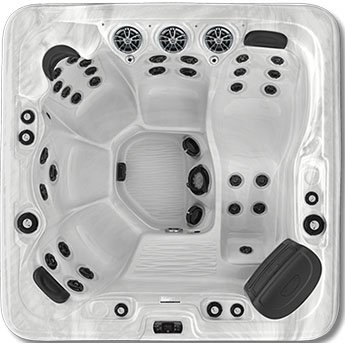 The Allure Series is the largest in the Dynasty Hot Tubs series.

While they aren’t necessarily the largest in size, there are more options to choose from in the Allure Series, perfect for those who want a feature-rich hot tub.

The Allure Series has a whopping eight hot tubs to choose from. Some of the hot tubs are equipped with loungers while others rely solely on bench seating.

In terms of capacity, these particular hot tubs range from five to six people.

The one thing that truly separates the Allure Series from the other series we have mentioned is the fact that they come with even more additional features.

Beyond all of the other features that we have already been through, the Allure Series gives you the option to add the inStream audio system with Infinity Speakers and an Infinity AM/FM/Bluetooth audio unit with USB and MP3 inputs. 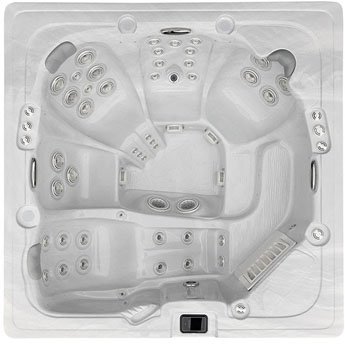 Last in line is the Radiance Series! Each of these hot tubs come with stunning underwater light shows that work to bring enrichment to your soak experience.

They can help to change the mood in the party experience.

Your footwell and spa lip will shine into the night with a spectrum of color.

Beyond the lights that are present within the tub, the Radiance Series comes with a full-color digital touchscreen display, backlit air/water diverters and cupholders, backlit hydrotherapy jets, and backlit water fountain jets.

The inTouch touchscreen display is very intuitive and provides you with total control over the lights and other parameters of the hot tub. Plus, you can incorporate your inTouch system with any smart device, including your phone or tablet. This allows you to have control from anywhere in your home!

The fact that the Radiance Series comes with Bluetooth compatibility is a huge game-changer. You can put on your favorite zen music while relaxing alone or turn up the system with some party tunes when the friends come over. The InStream integration gives you total audio control.

There are four tubs to choose from in the Radiance Series lineup, each of which includes 79 therapy jets, Elite Skirts, full-fledged lighting systems, integrated Wi-Fi control, inStream sound systems, and so much more!

If you are in search of a hot tub that has all of the features you could ever want, we highly recommend looking deeper into the Radiance Series. 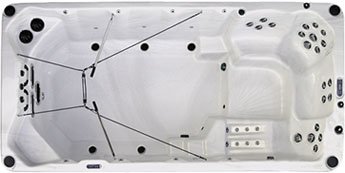 Similar to many other hot tub manufacturers, Dynasty offers a swim spa line as well. These swim spas are perfect for those who are looking to combine relaxation and fitness into their soak routine.

You can use swim spas to stretch, swim, relax, or hang out with friends! We like to think of swim spas as personal gyms.

Dynasty has six specialized swim spas to choose from, which can either be installed above or below ground.

Plus, they don't require permits as regular swimming pools do! Each swim spa includes a swim lane for guidance, as well as an included rowing kit that helps get you going with the resistance bands.

Once you add in the resistance that comes from the current system, you're looking at an incredibly effective piece of workout equipment that is far gentler on the joints than standard pieces of equipment you might find at the gym.

Final Verdict - Should I Buy A Dynasty Spa?

Dynasty provides customers with a variety of different high-quality spas to choose from. Whether you are looking to buy an easy-to-use and inexpensive plug and play model or a state-of-the-art, feature-filled luxury model with all of the latest features, Dynasty has a hot tub for almost everyone.

Their spas come with high-quality features, including top-notch hydrotherapy jets, gorgeous LED lighting, an innovative filtration system, and so much more. Stop holding off on your dream of owning a hot tub and check out what Dynasty has to offer!