With 25 hot tub models across four different lines and a branding deal with legendary Olympic swimmer, Michael Phelps, you might think that Master Spas has got it all together as a hot tub manufacturer.

However, the real question is,

Does this brand offer the right features and functionality to fulfill your needs?

Let’s dive in and see what Master Spas truly has to offer so that you can determine whether or not Master Spas is the best option for you.

Our top picks for master spas

How Much Do Master Spas Cost?

It is important to note that Master Spas does not actually list any costs on their website, though you can “shop by price”, which essentially gives you a price range of dollar signs that are undefined. This makes it a bit difficult to judge exactly how much you might expect to pay, though it does give you a general idea of the budget Master Spas models vs. the luxury Master Spas models.

To get a comprehensive price breakdown for your local area based on your preferences, click the button below: 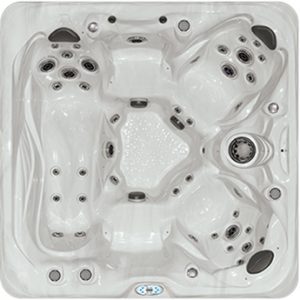 The moment you take a seat in these spas, you notice how nice it feels on the outline of your body.

This makes it much easier to relax in a natural state.

The seats are form-fitting and the way that the jets are placed provides hydrotherapy that is targeted to specific pressure points running from head to toe.

Beyond that, the Master Spas Healthy Living models have a Master Force Bio-Magnetic Therapy system, which helps to alleviate stiffness and reduce swelling throughout the body. Magnetic therapy has been around for centuries and we’re glad to see that Master Spas has implemented a system to provide that for hot tub users.

In terms of the lights and sounds, the Master Spas Healthy Living Series comes with dream lighting and an optional Fusion Air sound system for listening to music while you are relaxing. Overall, the Master Spas Healthy Living Series has models that can fit anywhere from two to eight adults at once. They also have seven jet types for pure, hot tub bliss.

With exclusive features and state-of-the-art design, it is made to provide users with a spa experience like no other.

The Master Spas Twilight Series tubs are built with an ergonomic design that provides comfort from the very moment you sit down.

The seats are similar to the Healthy Living Series, in that that they complement the contour of your body, which makes it very easy to relax.

The Master Spas Twilight Series comes with Master Blaster Foot Therapy, which provides users with a one-of-a-kind foot massage. In all, this helps with foot reflexology, which can extremely beneficial in a number of ways.

The Twilight Series also comes with the same Master Force Bio-Magnetic Therapy System as the Master Spas Healthy Living Series, as well as reverse molding for the neck and shoulders.

The Wi-Fi module helps to set the mood of the hot tub from your phone or tablet, meaning you can get everything up and running before you even step outside, making it perfect for cold weather environments!

The Master Spas Twilight Series has nine different hot tubs to pick from, which can hold anywhere from two to eight adults at once. 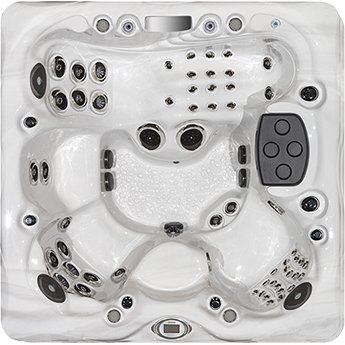 When it comes to pure performance, the Master Spas Michael Phelps Legend Series is an absolute winner.

This Master Spas Series comes with a very long list of top-notch features that makes it one of the most luxurious around.

One of the exclusive features of the Master Spas Legend Series is the Xtreme Lounger Therapy Seat, which helps to nourish your body and provide it with a powerful, therapeutic massage.

It also comes with Orbit Jets that have crystal-like nozzles. This provides the Master Spas Legend Series with a far more refined look. Plus, they even have adjustable velocity, which ranges from 10%-100%. You can easily adjust the power of the jets from one seat to the next!

All Master Spas models use high-quality insulation, which has been known to dramatically decrease energy costs. Master Spas uses Icynene foam technology, which works far better than standard urethane foam insulation systems. Icynene is polyicynene expanding foam, which is also environmentally safe, as it can be sprayed without destroying the ozone.

Icynene insulation expands to 100 times its initial volume in just a matter of seconds. This helps to insulate the spa quickly with a large blanket of soft foam insulation that acts as a thermal barrier between the hull and the shell. Your hot tub will stay warm longer and cut down on energy costs overall.

What Kind Of Water Management System Do Master Spas Use?

Master Spas models use the company’s cutting-edge Mast3rPur Water Management System, which makes use of three different types of hot tub sanitization, including UV-C Light, Ozone, and a copper + zinc combination. These methods are all produced by the EcoPur Charge filtration, which creates hot tub sanitation that is more effective than just about any solution on the market today.

Having these three methods at works helps to create better water quality while reducing the number of harsh chemicals within the water.

Final Verdict - Should You Buy A Spa From Master Spas?

We hope our review of the Master Spas hot tub models has helped narrow down your choice.

In our opinion, Master Spas is a solid hot tub brand. They manufacture all of their hot tubs here in the United States, which is a good sign, and they offer customers a wide variety of spas to choose from, especially those that are looking for something a bit more budget-friendly.

If you are in the market for a tub that is on the budget-friendly side, we highly recommend checking out Master Spas. It is simply one of the best hot tub and swim spas brands around.

Make sure to fill out the questionnaire below to save time and money. In doing so, you'll gain access to several hot tub price quotes based on your location and preferences!