The range and quality available from Costco has come a long way in recent years.

But is a plug and play hot tub from Costco really the best choice for you?

Let’s dive in and look at two of their best selling models. Once you’ve seen the pros and cons, we’re sure you’ll make the right choice.

Our top picks for plug and play hot tubs from costco

The best part about purchasing a plug and play model from Costco is that you can expect to get a better deal than you would at a traditional hot tub dealer. Costco offers two different plug and play hot tub brands at this point, including Evolution and Aquaterra.

What are Plug And Play Hot Tubs?

Plug and play hot tubs are very similar to traditional hot tubs in a variety of ways. Similar to traditional hot tubs, they provide users with therapeutic, hot water soak experiences and high-quality jet systems for muscle relaxation. The designs remain the same in many ways, and you can expect to find familiar features like stainless steel jets, led waterfall features, and led light features. 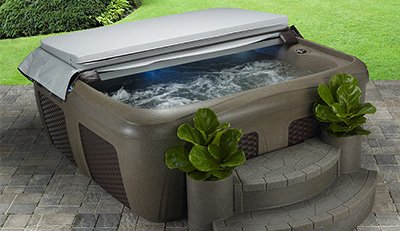 Advantages of a Plug and Play Hot Tub

Traditional spas require an installation process that is a bit more involved. They typically require separate circuits and 240v outlets to run. The set up for a plug and play hot tub is as simple as plugging in the included cord to a 110v outlet and pressing the button.

Not only does this make installation easier than ever, but it also takes installation costs out of the picture, as adding a 240v line can cost an average of $300. Depending on how large your traditional hot tub is or how antiquated your electrical set up is, you could end up spending thousands.

Plug and play hot tub models are known for being extremely portable, as they are not hard-wired into permanent outside GFCI boxes. They weigh a lot less than traditional hot tub models and can be broken down and transported in under an hour. If you are planning on moving soon and you are worried about not being able to take your hot tub with you, we recommend getting a plug and play model!

Disadvantages of a Plug and Play Hot Tub

One disadvantage with plug and play spas is that they do take a bit longer to heat up. Because traditional spas utilize larger pumps and more power, the temperature ends up rising much faster. Plug and play spa models, on the other hand, can take nearly a day to heat up.

When using traditional 220/240v spas, you will commonly get a dual-motor with a 160gpm (gallons per minute) speed. With plug and play spa models, you typically get a 120gpm pump. While you can still enjoy all of the basic hydrotherapy benefits of both spas, do note that the jet speed will be a bit weaker with a plug and play spa model.

Spa roadshows will typically last about a week and hot tub manufacturers will bring their hot tub lines into the warehouse so that customers may come in, browse through the different models, and have an opportunity to compare or ask questions.

Spa roadshows will usually start on Saturdays or Sundays and run throughout the course of the week. If you find out that there is a spa roadshow happening in your local area, you’ll have more than enough time to get out there and scope some brand new models!

Why You Should Buy a Spa From Costco

A lot of customers wonder if it waiting to buy a spa at Costco is worth it or not.

For starters, purchasing a spa from Costco instead of a traditional retailer is so much more convenient. Having the ability to visit one of their roadshows beforehand to test out different spa models doesn’t hurt either.

Customers have the ability to take advantage of the UPC barcode that is found on Costco spa products so that they can make sure they are getting the best deal. Of course, if a customer decides their newly purchased spa isn’t right for them, they can take advantage of Costco’s prime return policy!