A great swim spa is ideal to have in the comfort of your own home. The benefits that stem from swim spas include fitness, hydrotherapy, and entertainment.

However, the cost of chemicals, ongoing maintenance, and negative effects of chemicals on the body can put typical chlorine swim spas at a disadvantage.

If you've been wondering whether a saltwater swim spa is right for you, come with us as we explore the pros and cons.

What Is The Average Cost Of A Swim Spa?

Swim spas vary in price. Depending on the model that you decide to go with, you can end up spending anywhere from $8,000 all the way up to $30,000 or more. Swim spas are not cheap by any means, though compare that cost of a swim spa to that of a swimming pool, and it still comes in at only half the price.

Plus, unlike swimming pools, which can't be used throughout year, swim spas can be used all-year-round, which makes the investment far more justifiable.

Instead of spending hours shopping around to find the best spa prices, fill out our free questionnaire below. You'll receive multiple quotes on swim spas from local dealers based on your desired features!

For those of you who have spent time soaking in a hot tub or swim spa with chlorine, bromine, or other chemicals added into it, you may have noticed a bit of skin or eye irritation.

This is especially true if you have sensitive skin or eyes, to begin with.

Far fewer people are sensitive to salt water systems compared to the average chlorine system. You may find that using salt water is less harsh on your body. 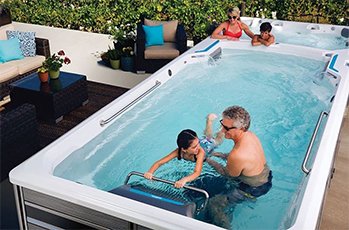 when you add salt and water together, you get a natural chemical reaction known as electrolysis. Spa models that use salt water technology give you a steady supply of chlorine. The beauty is that the amount of chlorine is much lower than if you were to add it to your spa manually.

If you've ever floated in the ocean, then you know how buoyant salt can be. You'll get greater buoyancy with a salt water system than with chlorine or bromine, which can help you swim better and keep your body afloat.

The added benefit of buoyancy is that you don't have to deal with as much pressure on your muscles and joints. If you have a swim spa that doubles as a hot tub, you will be able to take advantage of a far more therapeutic soak.

Lower Costs In The Long Run

While the upfront cost of salt water swim spas can be higher than a traditional system, they end up being much cheaper in the long run. Chlorine runs around $25 for a 40-pound bag. Salt, on the other hand, costs less than $10 per bag.

Salt water swim spas are self-regulating. Owners don't have to perform as many pH tests and they can leave the water untouched for longer periods without having to make chemical adjustments.

You'll get to spend more time enjoying all of the benefits of your swim spa without having to perform constant maintenance.

While there are plenty of benefits you can get out of salt water swim spas, they don't come without their disadvantages. Here are some 0f the top disadvantages:

Salt water swim spas tend to cost more than traditional swim spas upfront, even though they are much cheaper to maintain in the long run. See here for pricing.

Salt Can Be Corrosive

Salt is a very naturally corrosive compound. Even if you use salt in smaller amounts, it can be damaging if not dealt with carefully. While you likely won't have to deal with tons of damage due to salt corrosion, it is always a good idea to create a process of cleaning and wiping down the metal components on your swim spa regularly.

You also want to make sure that the salt levels in your swim spa are not too high either.

So yes, saltwater systems are not completely maintenance-free. You still need to be considerate of the water chemistry. However, it is much easier to maintain crystal clear water when using a saltwater system.

Are Salt Water Spas Good For You? 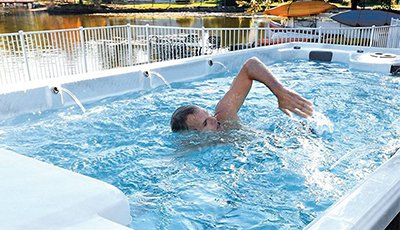 Salt systems have become incredibly popular over the last couple of years thanks to the numerous benefits they provide. For starters, salt water pools, hot tubs, and swim spas, have much softer water compared to traditional spa models without salt water technology.

People love the fact that salt acts as a gentle and natural exfoliant, removing dead skin off the surface of the skin. Salt also helps to clean pores, decrease skin bacteria, and balance oil production.

Beyond that, the environment will thank you too. Because you don't have to drain and refill your water as much when using a salt water system, you'll be able to maintain clean water without dumping a nasty concentration of chemicals into the Earth.

One of the biggest reasons people go with swim spas rather than swimming pools is that swim spas have a much smaller footprint.

You can easily install them on decks or above-ground platforms, such as concrete.

Compared to swimming pools, swim spas are much easier to maintain. You'll be able to keep your spa water clean for a fraction of the cost of what you would pay for in average salt water pool systems.

Pools are often bad investments too. Once they're older than ten years old, they will only increase the resale value of a home by 6% at the highest. You will probably lose money after installation your pool too, especially if you move soon after. Instead of investing in a salt water pool, invest in a swim spa and get the best of both worlds.

For more of an in-depth analysis, see our swim spa vs pool page.

Final Thoughts - Should You Buy A Saltwater Swim Spa?

If you're looking to turn your backyard into a fitness and relaxation oasis, look no further than the world of salt water swim spas. You get all of the benefits of a salt water pool and hot tub in one system, which you can use no matter what time of year it is.

Of course, as with any major purchase, it is important to consider the pros and cons so that you can make the right decision for your needs. .

Make sure to fill out our FREE questionnaire below to get quotes on swim spas from local dealers, all based on your preferences!