Finding a quality spa for an affordable price can be quite difficult with so many hot tub manufacturers on the market. So how does Four Winds stack up to the competition?

We've done the research for you.

Which of their 5 series will best fit your needs?

Like many manufacturers, Four Winds Spas does not have pricing listed explicitly on its website, as buyers are meant to receive quotes based on how they decide to customize their spas. Plus, the cost is often based on location and delivery as well.

With that said, Four Winds Spas is known as a budget-friendly spa company, perfect for those who aren't looking to spend an arm and a leg on a hot tub. Click the link below to learn more about prices and get free quotes from dealers near you based on your preferences!

Who Is Four Winds Spas?

Four Winds is a fairly new American spa manufacturing company that utilizes some of the finest American components to manufacture high-quality hot tubs and swim spas. Some of the components used by the company include Balboa, Waterway, Lucite, and Aristec.

The company is located just outside of Nashville, Tennessee. With its state-of-the-art manufacturing distribution facility, the company has made a commitment to providing consumers with the best hot tubbing experience possible.

There are four hot tub series in the lineup, including the Typhoon Series, Cyclone Series, Tropical Series, and Storm Series. 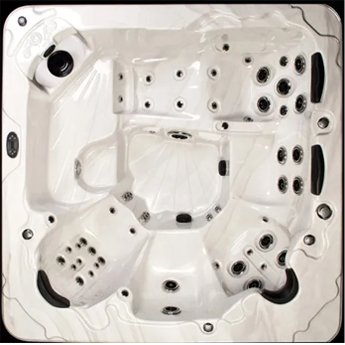 The Typhoon Series has a variety of three pump 12-amp dual-speed systems.

Each of the spas in this lineup comes equipped with LED lighting, a touchscreen topside control, and a Wi-Fi module, allowing you to control your hot tub from anywhere in the house.

Some of the standard features include waterfalls, 360-degree filtration, and green energy retention.

There are six hot tubs to choose from, all of which come with jets for maximum comfort and relaxation.

The most popular hot tub in the Typhoon Series is the Caribbean III, which is a five-person, 84-jet spa model. 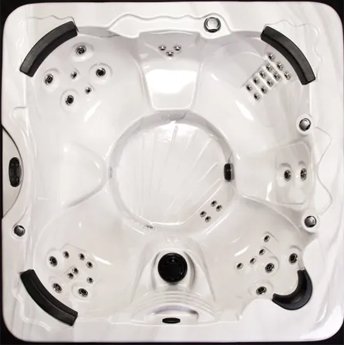 Each of the hot tubs in this series also come with LED lighting, a topside control system, and a Wi-Fi module.

One of the top hot tubs in the Cyclone Series is the Kauai II.

This particular six-person model has been around for over a decade and continues to sell better than just about any spa model in the lineup.

This model comes with neck and shoulder massage jets, a cascading waterfall, and a footwell for total relaxation and healing. 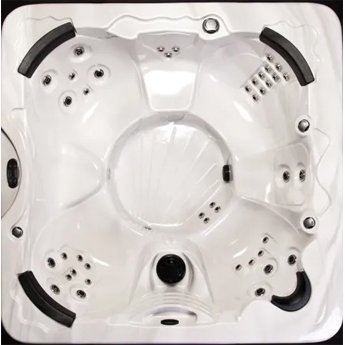 Within the Tropical Series lies eight high-quality spa models, each of which comes with one-pump, 12-amp dual-speed systems.

One of the most popular spa models in the lineup is the Trilogy.

This three-person spa comes with high-performance hydrotherapy, perfect for those who are looking to get a high-quality massage.

Plus, this two-pump spa is great for those who don't have a ton of real estate to sacrifice. 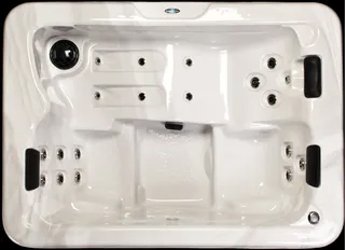 The Storm Series is the most affordable series in the Four Winds lineup.

Each of the hot tubs within this series comes with a one-pump economical system, perfect for those who want something that is a bit more portable.

Many people like to refer to the Storm Series as the plug-n-play series, as all of these hot tubs utilize 110v power requirements.

You can simply plug in any spa from the Storm Series into a standard home outlet without having to worry about any special sort of wiring.

Of course, if you're looking for a more energy-efficient system that you can use all of the time, then we highly recommend going with the 220v system.

Each of the spa models within the Storm Series comes with LED rainbow spa lighting, 360-degree filtration, a green energy retention system, and a cover.

One of the most popular hot tubs in this three-tub lineup is the FW 400. The FW-400 is one of the best entry-level models in the entire spa lineup perfect for those who want a high-quality plug-n-play spa without spending a ton of money. Plus, the 110v installation process is incredibly easy. you may even be able to do it by yourself without calling a service guy. 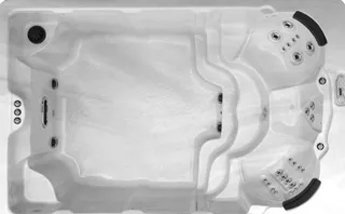 It should also be noted that Four Winds has a lineup of three different swim spas known as the XL Swim Series.

A swim spa is very similar to a swimming pool, though offers year-round swimming thanks to its propulsion jet design and warm water system, solving the seasonal problem of a pool.

You can choose to add a wide variety of features as well, including the integrated Bluetooth stereo system, a cover lifter, backlit jets, cupholders, and more.

Where Can I Buy Four Winds Replacement Parts?

If you currently own a Four Winds spa and you're looking to do some DIY maintenance or repairs, there are plenty of places to find high-quality replacement parts in good condition.

One of the best places that we often recommend for spa users looking for parts is Hot Tub Outpost.

Make sure to check out their website for more information on inventory, delivery, and service.

Four Winds hot tubs get consistently high reviews from customers. Because these spas are made with high-quality American components, you get long-lasting use out of them.

As for the average company rating and review, most owners have bragged about having a great experience with their spa.

If you're in the market for an affordable yet high-quality spa to create your own little oasis in your backyard, then we highly recommend going with Four Winds.

Instead of spending tons of time shopping around to find the best spa prices, fill out our free questionnaire below. You'll receive hot tub price quotes based on your desired features!